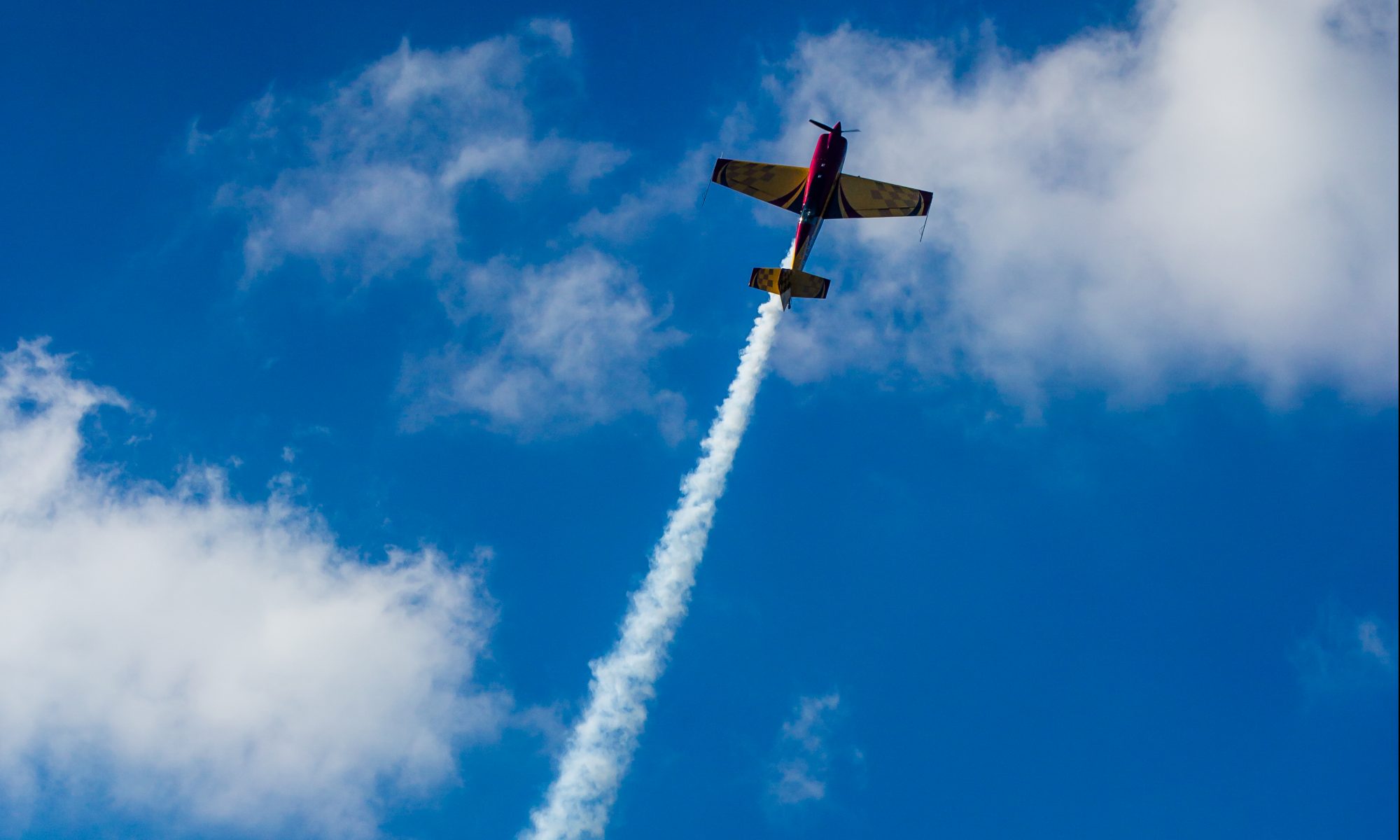 A little over 100 years ago ‘basic aerobatics’ emerged from military piloting maneuvres for aerial combat. Now it has evolved into a pure form of flying to perfect flying skills for any pilot.

In 2009, at my first aerobatic competition in Amiens, I was utterly surprised to see that the aerobatic box was so tiny and that my fellow competitors were tremendously prepared for every sequence they would fly. Needles to say I finished last in the final ranking, having accumulated practically every possible penalty. On this page I aim to provide you with essential information on the sport aerobatics, such as the aerobatic box, categories, judging criteria, aerobatic aircraft and limitations, sequence design, training and preparation. This way you would engage in competition aerobatics, you’ll be better prepared than I was at the time.

Four categories are flown in most European countries. They vary by difficulty of the individual aerobatic maneuvers they contain, as well as the combination of those maneuvers within the sequence. In order of increasing difficulty, the categories are: Sportsman, Intermediate, Advanced and Unlimited.

France has a different denomination for their aerobatic categories. They have 2 separate categories, based on aircraft characteristics:

In other European countries there is no 70% rule to enter a competition category. However, your first flight in competition is your test flight. If you performance is deemed insufficient, you will be disqualified.

All aerobatic figures are flown in and relative to the aerobatic performance zone – we call it the “box”. This is a 1,000m cube in the air with its lower face at 100m above the ground and defined by two land-based axes:

The “A” or main box axis is aligned with the competition wind (flight along this axis will by definition therefore be either into wind or down wind).

The “B” or cross box axis is aligned at 90° to the main / “A” axis. The height above the ground of the minimum allowable flying altitude (the base of the box) varies depending on the class of competition being flown from 100m for Unlimited to 300m for Sportsman.

In an aerobatic competition, to rank the quality of the sequences flown from “best” to “worst” there need to be judges (minimum 3 and up to 10). Whilst in many sports the winner can easily be determined by who scores the most goals or pots the most balls, who flies the “best” aerobatics is a subjective matter based on observation of every element of the sequence of figures flown and the application of a set of rules or criteria to grade the result. An internationally agreed format for running aerobatic competitions and judging aerobatic flights has been established and refined by the FAI (Fédération Aéronautique Internationale) / CIVA (Commission Internationale de Voltige Aérienne) over many years.

Grading or judging an aerobatic sequence is not a simple task, since the figures can be complex and applying the quite precise grading criteria requires not only a good deal of human “judgement” but the speed and skill to keep up with the action.

For every 5° of yaw, pitch or roll by which the aircraft CGT (Center of Gravity Track) or ZLA (Zero Lift Axis) differs from what is required when starting, at all ‘key’ points and at the exit from each figure, you should deduct one point. A cumulative error in any figure of more than 45° must by definition result in a mark of 0.0

A very important point to remember is that the whole aerobatic judging system:

It DOES downgrade from a fixed “bank” (10) to penalise specific / observed errors by fixed amounts.

First and foremost, the aircraft you will be using should be certified for all the aerobatic maneuvers you intend to fly. Today there are a variety of aircraft types that are fit for aerobatics. The most common manufacturers today are Extra, Yak, Sukhoi, CAP, Pitts, Edge and XtremeAir. Vintage aircrafts are also suited for the first classes of aerobatics like SV4, Bücker or Stearman.

Depending on your level of expertise and ambition level, you could be a rising star in a Bücker biplane in the sportsman category, or a complete animal in an Extra 330SC in the unlimited category. You could also opt to fly an Extra in the Sportsman, but not a Bücker in the unlimited.

The Fédération Française Aéronautique (FFA) has put forth a set of rules to the use of aircraft in different classes in France. Naturally, only two-seat aircraft are allowed in the “biplace” category. But within this category, they have pointed out that there is a maximum of “Positive-” and Negative-G” you can pull during a sequence (e.g. Espoir +4,5 to -3G). This rule not only makes the competitors fly their aircraft efficiently and with finesse, it also decreases the wear and tear on these two-seat trainer aircraft.

An aerobatic sequence is composed of series of different figures. These figures are from so-called ‘families’: the family of Loops and Eights, Rolls , Stall turns, 90° & 45° lines etc. The figures are meant to be geometrically correct, so the loops need to be round (whatever the wind conditions of the day) and the lines need to be consistently correct, also before and after the optional rolls.

In order to write aerobatic manoeuvres (bits of figures), figures and sequences down on paper so that other people can read, fly and judge them a universal ‘language’ is essential. The system used throughout the aerobatic world was originally developed by the Spanish aerobatic ace José Louis Aresti.

To become proficient as an aerobatic judge or pilot a good understanding of the Aresti Aerobatic System (Condensed) is a priority. It has a basic set of ‘rules’ which govern how the symbols are used, and each manoeuvre has an identifying reference number with a numeric coefficient to define the difficulty rating, allowing the user to build composite figures with the relevant ‘K-factors’. The catalogue lists the complete range of basic and complementary manoeuvres from which aerobatic figures may be constructed for inclusion in each competition sequence.

During a competition, up to 5 programs (sequences) can be flown. For the first categories (Sportsman, Intermediate, Espoir, Promotion and National 2) a Known sequence will be the first program. This Known program is predetermined at the start of the year and can be practiced until the day it is flown at the competition. Subsequent programs will be called Unknown and will be completely new to the pilot. there is no possibility to practice this sequence, so the first time you will fly it, you will be graded by the judges.

For the Advanced and Unlimited categories is it slightly different. Their first program is a Free Known sequence. At the start of the year the Commission International de Voltige Aerienne (CIVA) will issue 5 mandatory figures to be flown and another 5 will be free to choose, totaling 10 figures in the Free Known sequence. Subsequent programs are Free Unknown. Here the same applies, 5 figures are imposed and 5 are Free. In the Unlimited category a Final Freestyle is the last program. In this pilot-designed Free sequence the pilot will be graded on Technical skill, Artistic impression and Positioning. It is also a program that usually has the aircraft smoke system turned on.

At first, everybody has to learn aerobatic flying with someone else in the aircraft. When you are training, the competence of the instructor is more important than the performance of the aircraft. However, outside the competition field, there is no grading field for aerobatic instructors and so it is difficult to know who is cost effective and safe. The only ways to find out are by recommendation and personal judgement. From my own experience I can only say that in my first year of aerobatics, I primarily based my maneuvers on what I’ve learned years ago in military pilot training and…from books. After living through my first competition it was obvious that a competent instructor would prove to be a much better return on investment that a thousand books and self-learning. At the start of your training, the instructor will be sitting in the aircraft (in the front, the back or next to you). When he or she clears you to solo, the instructor will be coaching you from the ground, looking at your performance and coaching you over a hand-held radio.

My military flight instructors would always preach the “7 P’s”, Proper Pre-flight Planning Prevents P*ss-Poor Performance. There is no better way to describe the importance of preparation. Each flight should be prepared reviewing every maneuver in depth so that once you’re in the aircraft and your brain is occupied in ‘just’ flying the aircraft, the actions for the aerobatic maneuvers in the aircraft are semi-automated and you can focus on the details to achieve perfection. Mentally preparing on which actions you will take and where to look when you’re taking them, will prove to be one of the keys to succes in any aviation discipline. This is also why -at a competition scene- you will see the competitors on the ground do a strange kind of dance where they’re going through the motions of their flight, reviewing every detail and mentally preparing themselves for their sequence.

Feel like flying aerobatics yourself? Getting an aerobatic rating on your Flight License is a good starting point for competition aerobatics. Currently two training organizations hold their aerobatic instruction license: ‘Propellor’ at Kortrijk-Wevelgem and ‘Aero Kiewit’ at Hasselt-Kiewit: